The lives of people with mental health conditions are often plagued by stigma as well as discrimination.  Stigma is a negative stereotype.  Stigma is a reality for many people with a mental illness, and they report that how others judge them is one of their greatest barriers to a complete and satisfying life.

Stigma differs from discrimination.  Discrimination is unfair treatment due to a person’s identity, which includes race, ancestry, place of origin, colour, ethnic origin, citizenship, creed, sex, sexual orientation, gender identity, gender expression, age, marital status, family status or disability, including mental disorder.  Acts of discrimination can be overt or take the form of systemic (covert) discrimination.  Under the Ontario Human Rights Code, every person has a right to equal treatment with respect to services, goods and facilities, without discrimination due to the identities listed above.

There are significant consequences to the public misperceptions and fears.  Stereotypes about mental health conditions have been used to justify bullying.  Some individuals have been denied adequate housing, health insurance and jobs due to their history of mental illness. Due to the stigma associated with the illness, many people have found that they lose their self-esteem and have difficulty making friends. Sometimes, the stigma attached to mental health conditions is so pervasive that people who suspect that they might have a mental health condition are unwilling to seek help for fear of what others may think. Experiences of stigma and discrimination is one of their greatest barriers to a satisfying life.

What you can do to stop stigma and discrimination

Use person-first language which focuses on the individual, not on the substance use. Language used is an important factor in reducing stigma and breaking down negative stereotypes associated with substance use disorders. By using non-stigmatizing language, those who are experiencing challenges may experience fewer barriers to accessing supports.

The following guide includes some suggestions of person-first language in mental health:

CMHA Ontario has also developed a one page primer on talking about substance use to help.

Use the STOP criteria to recognize attitudes and actions that support the stigma of mental health conditions. It’s easy, just ask yourself if what you hear:

If you see something in the media which does not pass the STOP criteria, speak up! Call or write to the writer or publisher of the newspaper, magazine or book; the radio, TV or movie producer; or the advertiser who used words which add to the misunderstanding of mental illness. Help them realize how their words affect people with mental health conditions.

Start with yourself. Be thoughtful about your own choice of words. Use accurate and sensitive words when talking about people with mental health conditions. 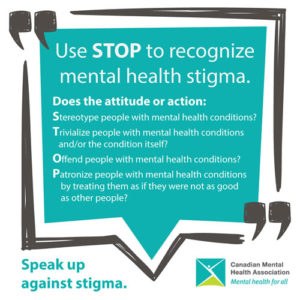